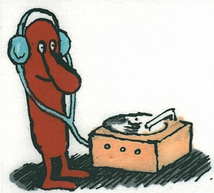 Hooray! Kjetil Falkenberg Hansen from KTH has defended his doctoral thesis under the topic of turntablism. You migh take a closer look here (or download it here).

Abstract for the Thesis

This thesis focuses on the analysis and modeling of scratching, in other words, the DJ (disk jockey) practice of using the turntable as a musical instrument. There has been experimental use of turntables as musical instruments since their invention, but the use is now mainly ascribed to the musical genre hip-hop and the playing style known as scratching. Scratching has developed to become a skillful instrument-playing practice with complex musical output performed by DJs. The impact on popular music culture has been significant, and for many, the DJ set-up of turntables and a mixer is now a natural instrument choice for undertaking a creative music activity. Six papers are included in this thesis, where the first three approach the acoustics and performance of scratching, and the second three approach scratch modeling and the DJ interface. Additional studies included here expand on the scope of the papers.

For the acoustics and performance studies, DJs were recorded playing both demonstrations of standard performance techniques, and expressive performances on sensor-equipped instruments. Analysis of the data revealed that there are both differences and commonalities in playing strategies between musicians, and between expressive intentions. One characteristic feature of scratching is the range of standard playing techniques, but in performances it seems DJs vary the combination of playing techniques more than the rendering of these techniques. The third study describes some of the acoustic parameters of typical scratch improvisations and looks at which musical parameters are typically used for expressive performances. Extracted acoustic and performance parameters from the data show the functional ranges within which DJs normally play.

Unlike traditional musical instruments, the equipment used for scratching was not intended to be used for creating music. The interface studies focus on traditional as well as new interfaces for DJs, where parameter mappings between input gestures and output signal are described. Standard performance techniques have been modeled in software called Skipproof, based on results from the first papers. Skipproof was used for testing other types of controllers than turntables, where complex DJ gestures could be manipulated using simplified control actions, enabling even non-experts to play expressively within the stylistic boundaries of DJ scratching. The last paper describes an experiment of using an existing hardware platform, the Reactable, to help designing and prototyping the interaction between different sound models and instrument interfaces, including scratching and Skipproof.

In addition to the included papers, studies were conducted of expressivity, description of the emotional contents of scratching, DJ playing activities, and the coupling between playing techniques and sample. The physical affordances of the turntable, mixer and samples, as well as genre conventions of hip-hop, are assumed to explain some of the findings that distinguish scratching from other instrumental sounds or practices.